Banteay Srei is a Hindu temple located in the northeast of Angkor Wat, dedicated to Shiva and Vishnu. Banteay is a fort and Srei is a woman, which together means "a woman's fort." It began construction in 967 during the reign of King Rajendravarman and was said to have been completed at the time of his son, Jayavarman V.

Banteay Srei is a beautifully carved temple made of laterite and red sandstone, one of the small Angkor archaeological sites that you should definitely visit.

The statue of the goddess of the Orient, called Mona Lisa, is particularly famous in the picture on the right, and there is an anecdote that André Malraux was fascinated by the statue and stolen and arrested in 1923.

Banteay Srei is surrounded by an outer wall and has an entrance to the east. When you pass through the gate, you will find the approach to the approach. In the photo below, the water on both sides of the approach is not a pond, but a puddle formed during the rainy season. Behind the approach, there are no intimidating temples like Bayon or Angkor Wat.

Follow the approach and pass through the gate of the first wall, there is a moat, and a bridge filled with soil leads to the second wall and its gate. The center of Banteay Srei is, as you can see, very small. But there is a surprising sculpture hidden in this.

When you pass through the tower gate on the third wall, it is finally the core. Exit to the front room of the Banteay Srei Central Shrine. Click on the photo below to see a super-detailed enlarged photo. Please take a closer look at the relief of Shiva God dancing in the central gable part. Reliefs are also applied to the left and right gables respectively. Please note that the image is about 8.5 mega.

As you can see, Banteay Srei has many beautiful reliefs depicting Hindu legends in the gable area. The photo below shows a scene from Ramayana, depicting three competing monkey brothers. 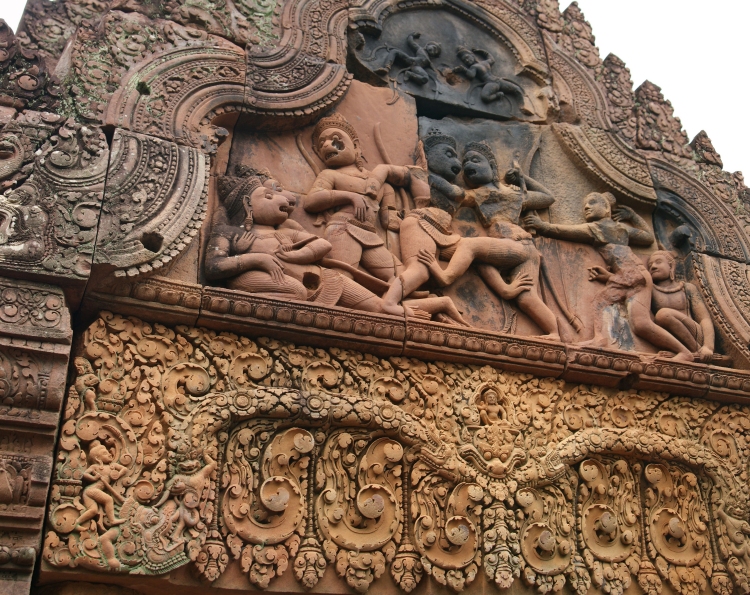 At the heart of Banteay Srei is a relief and a statue of a goddess around the tower of the Central Shrine. The photo below shows the west side of the Central Shrine. The photos are slightly distorted because multiple photos were combined into one. Click to display a super-resolution enlarged photo. Please note that there is more than 13 mega. There are several devata (goddesses), so please watch. 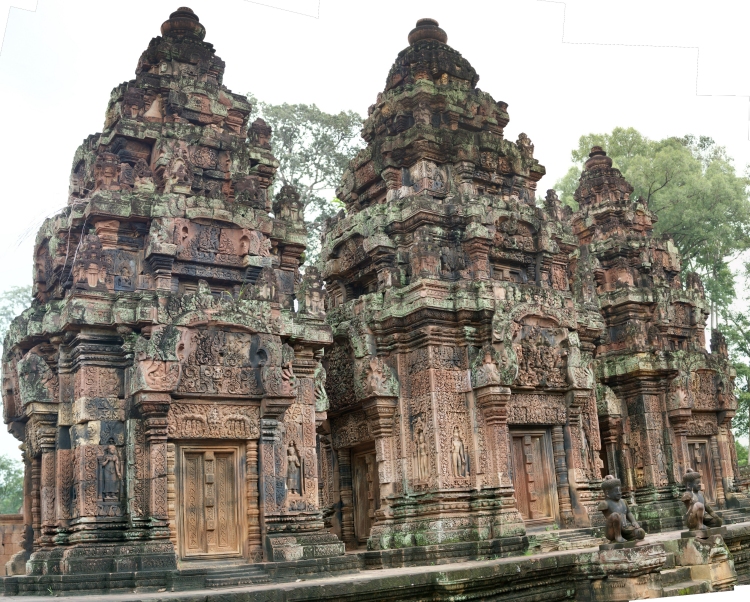